Last year I was wearing the original version (on the left) of this Burdastyle wrap dress (bodice and skirt, sleeves from f this pattern – without the zipper) during Me-Made-May a couple of times, but I never blogged about the dress itself. This second model (on the right) has quickly became one of my favorites, and apart from some minor changes this has basically the same story as the first one, so here is the quick(ish) lowdown on how both of them were made.

I found both fabrics in the remnant box – as usual. Then I started thinking about updating the wrap dress somehow, and I stumbled upon an article on how the Diane von Furstenberg dresses are finished. Instead of using an entirely different pattern, I decided to stick with what I have used before and just modify it here and there.

According to the blog post, on the Diane von Furstenberg dresses the facing is cut together with the front panels and simply turned under and ironed, instead of cutting a separate facing, understitching it, then turning it under. I had difficulties doing the understitching with the first version, so I was seriously considering redrawing the front pattern pieces, but the fabric is way too fine to allow me any invisible blind stitching, and I was worried it wouldn’t lay flat, so I decided to stick with the original faced front pieces.

The facings were not attached to the back of the front panels at all first time around, which was really very annoying. This time around I used a hemming tape, which gives the neckline a tiny bit of structure too.

The biggest alteration I made was changing how the sleeves are finished.  On the first one they are simply turned under twice and stitched down. This made them a little bulky and not very even. On the second dress I shortened the sleeves and added cuffs which I absolutely love.

Instead of turning the skirt under and stitching it down, like I did on the first dress, I blind hemmed this one. Again, I think doing this must be easier on a thicker jersey, like what the DvFs are made of, as for me it was quite a pain, and it is not totally invisible, but it still looks a lot nicer than on the previous version.

This is one of those dresses that tick most boxes: I love the fit; it makes me feel professional enough-yet casual at work and it is super comfy. I would declare it the perfect dress, if it didn’t have this minor issue: I am flashing like crazy while cycling… 🙂 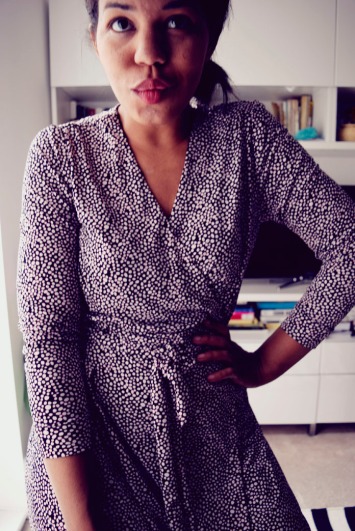 8 thoughts on “Yet another wrap dress”