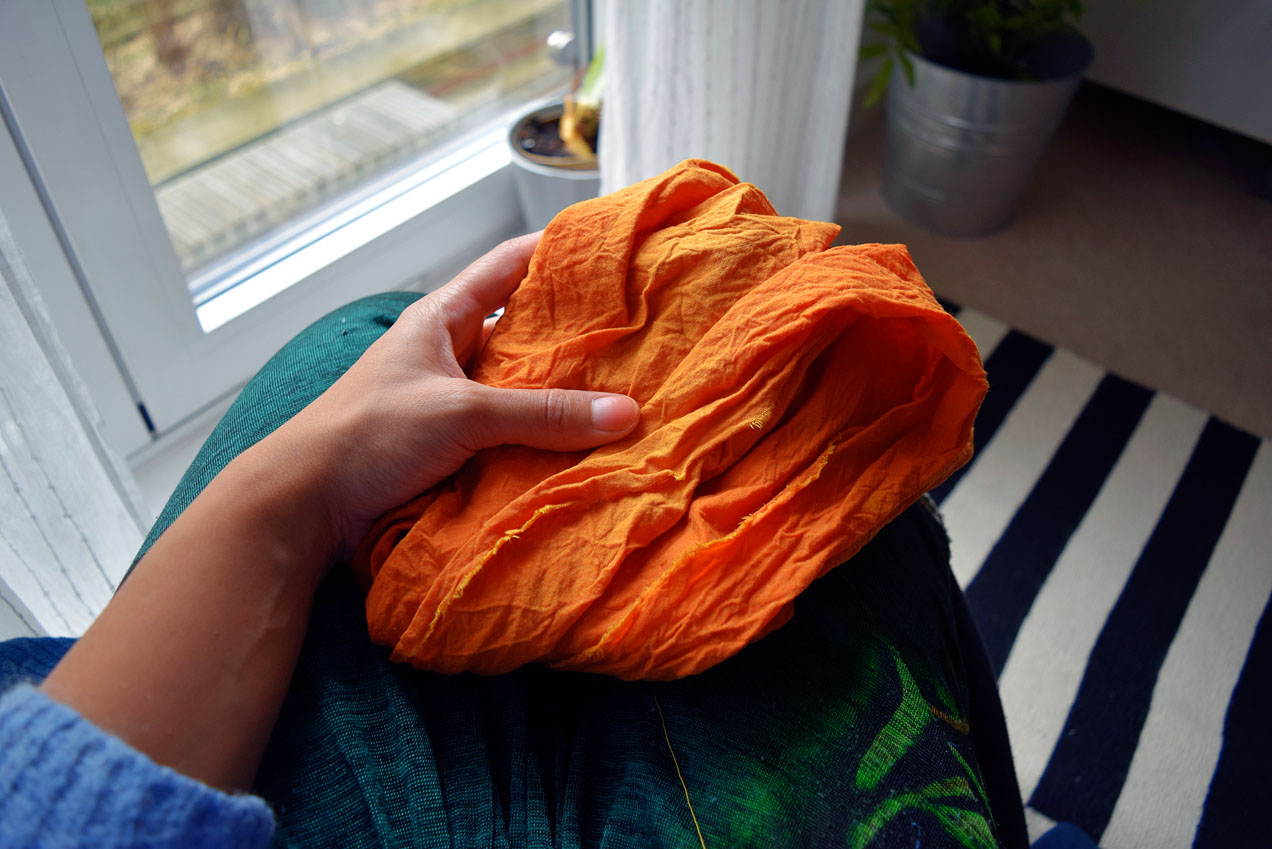 I don’t think I personally know anyone who takes Valentine’s Day seriously, yet when it comes to the 14th February, all of a sudden people kind of feel like doing a little something for their loved ones. That is pretty much my attitude as well, although this year turned out to be a bit different in many ways…

First of all, I decided to take part in this year’s Secret Valentine Exchange. Then I found out that the surgery I was waiting for would be right before I was supposed to send the #2017sve gift off, so I was left with a few days to plan and create said gift. And lastly, I happen to have someone special to spend this particular Tuesday with, which gave me another reason to make something. 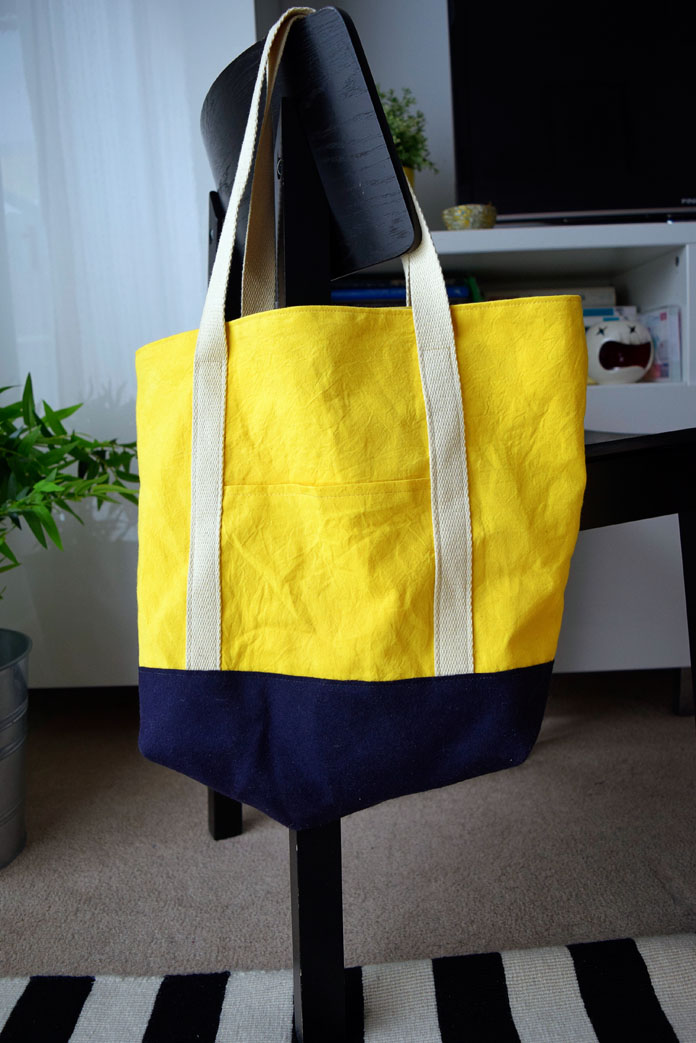 For the Secret Valentine Exchage I got to make a present for Stacy, an artist in the US, who seems to be really good at using natural dyes to create beautiful fabrics and yarns. She likes earth tones, and natural fibers, so half way through sewing a kimono robe for her, I realised that it may come out looking nice and perfect to make Valentine’s Day a little special, but ultimately the colour and texture are very far from what she would be happy to wear, so I decided to make something else.

I love making bags and I always wanted to try dyeing with something I can find in the kitchen, like turmeric, so I ended up doing both.

I used this brilliant pattern & picture tutorial, and managed to finish it in about 4 hours from drafting the pattern to sewing the final hand stitches. I have saved the pattern as it makes for a very neat bag, although in future I think I would make it slightly deeper and a bit narrower.

The turmeric dyed fabric turned out to be bright yellow, and not the ochre shade it looked like while wet (picture on top), which was a big surprise, but I was still pretty happy with how intensive the colour was. I don’t know a lot about dying fabric, so other that using an aluminium pot (does it even matter) for the dyeing process, I don’t think I did anything to make it colour fast, so fingers crossed it won’t cause any trouble while washing it… 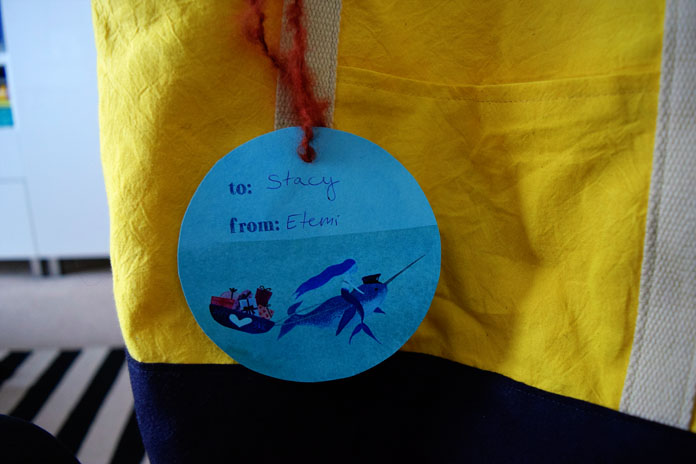 I got a big box of goodies “in return” from Regina in Pennsylvania. It included 2 little zippered pouches, 3 fat quarters for quilting, two fabric marker pens, a thread wax and a lovely letter. The little bags are so impeccably made I could hardly believe they were not fed through some industrial machines calibrated just to make things like these. I really love the fabric choices as well, they look exactly like things that would catch my eyes in a store. 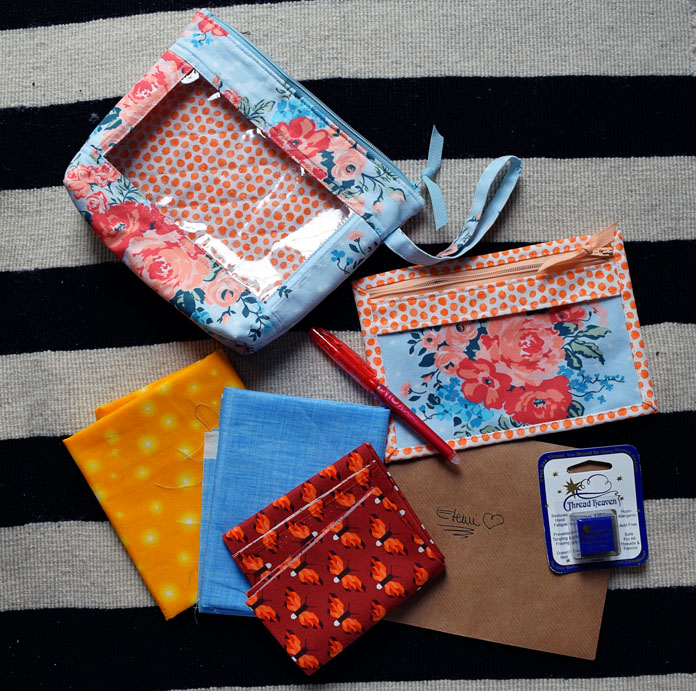 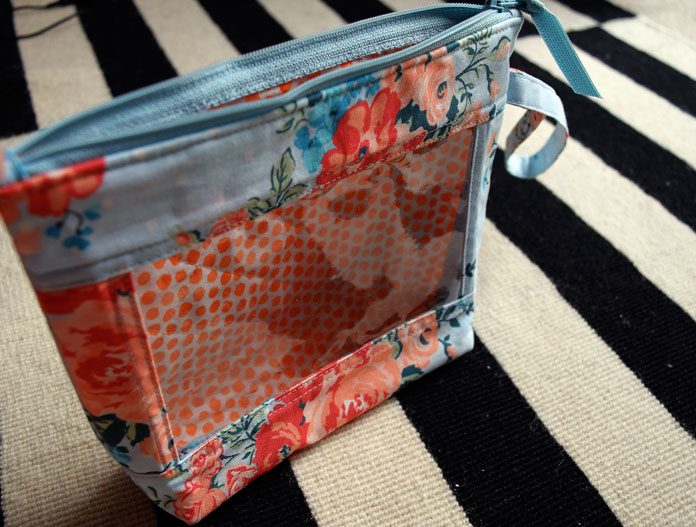 The fat quarters are really fun too, and what’s best is that I don’t actually have any proper quilting fabric at hand, so they really do fill a gap in my stash.

What I was also missing until now were those marker pens. I have never been a fan of the tailor’s wax or chalk, so hopefully they will end up being as useful as I imagine them to be, just like the thread wax which I am already familiar with. Thank you so much Regina! 😀 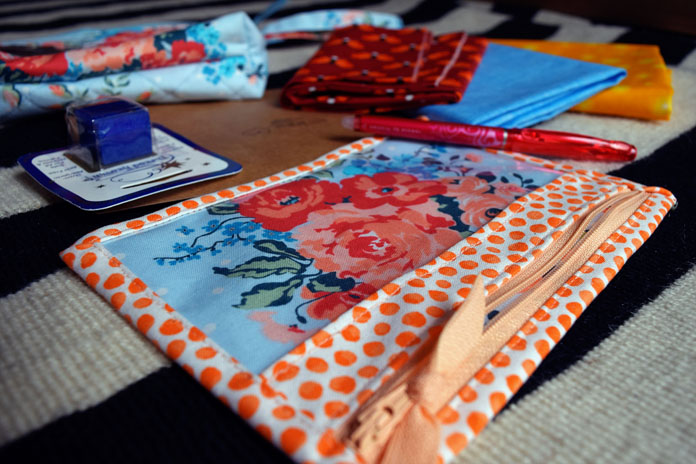 Since the surgery, I have been home-bound, so when my boyfriend mentioned that Valentine’s Day is coming up, I thought it would be best to use my time making a little gift, just in case he feels like surprising me (he did 😉 ). He has to wear a suit to work, and sometimes he even puts on a tie, so it seemed like a good idea to try to make one.

I picked out two fabrics for the project from my stash: an African print waxed cotton and a silk sari with a really bold print. Since I was doubted he would wear the latter one, I decided not to cut into that sari just yet, and went for the blue and red cotton fabric. 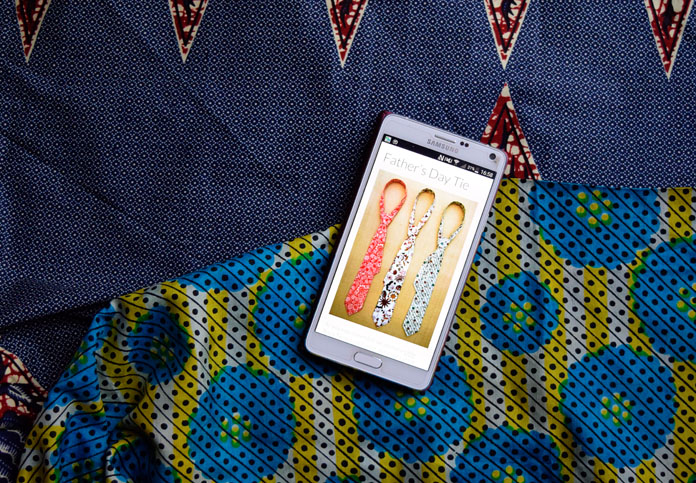 Using this pattern (with some modifications), and some of the instructions from Purl Soho’s tutorial, I ended up with something very much resembling a tie. It feels super long though, so we’ll find out tonight if it actually works like a tie is supposed to… 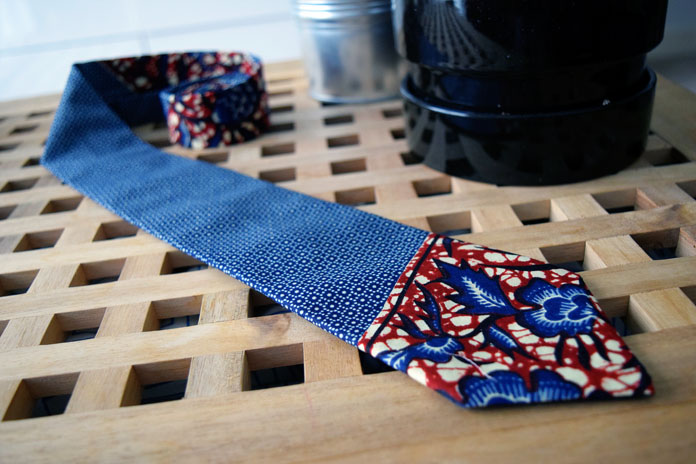 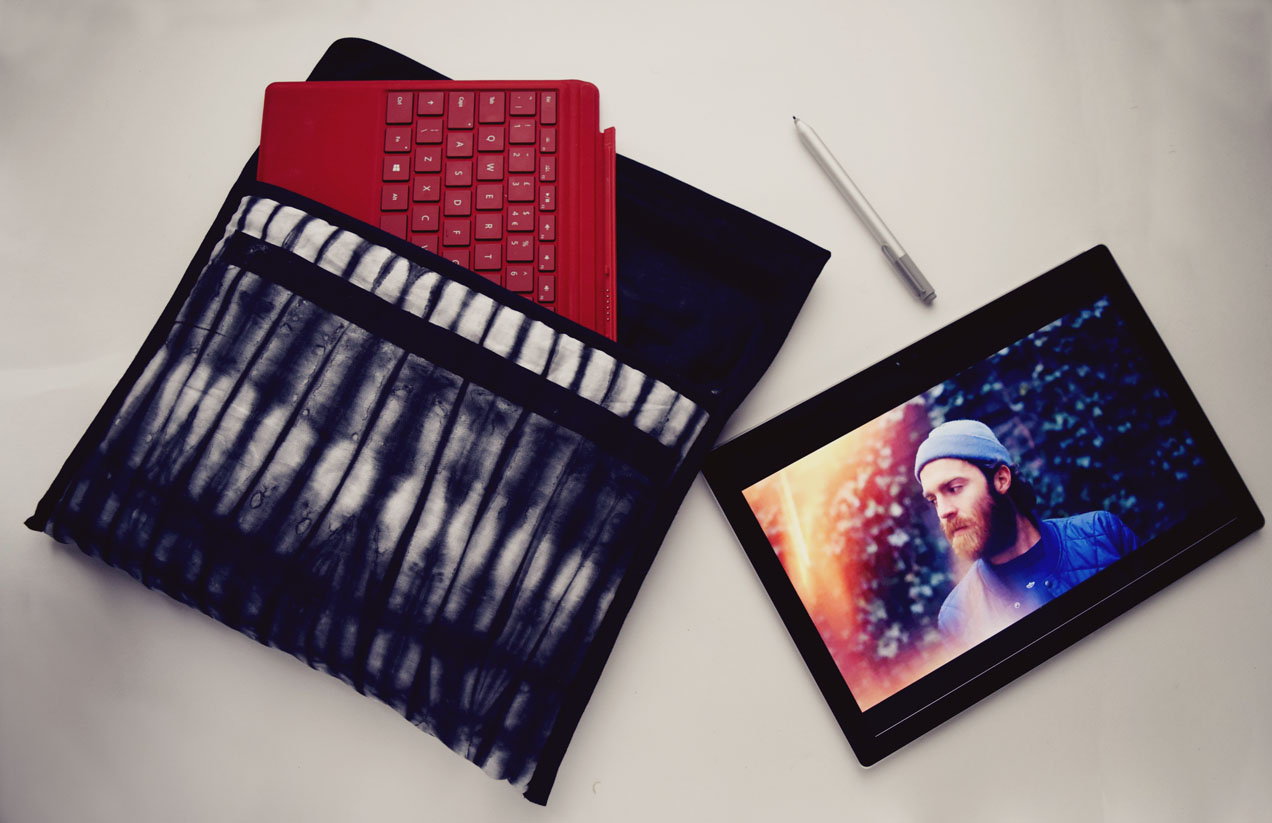 I love travelling. I love preparing for trips. I probably spend more time researching compression socks for long flights, hammams for a stopover in Istanbul or cameras that are not only affordable, but will work for taking photos on holiday as well as in the flat, for shooting the latest piece of fabric I’ve just snapped up, than actually on said holidays.

After an epic 4 month research, review reading, Youtube watching, saving, and a fair amount of dreaming, I finally updated my 7 years old laptop. In laptop years that is exactly a hundred, but the veteran still stays in the family. The new kid is currently being tested, I love new technology, but I’m also quite suspicious, so the box it came in will be part of the furniture for another 12 days… 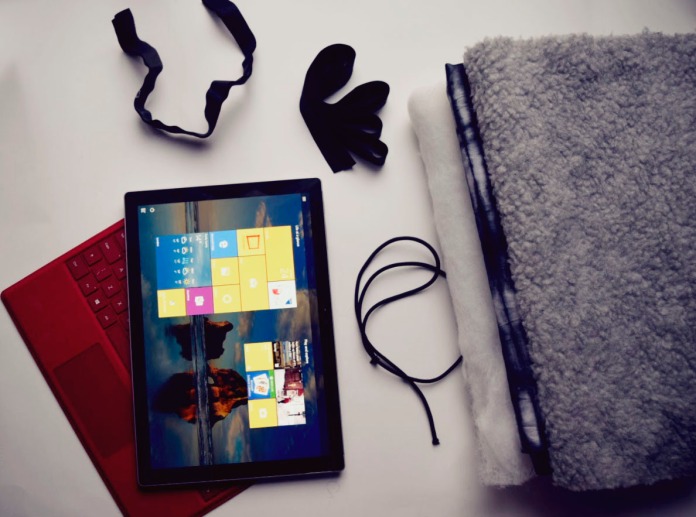 In the meantime, I decided to make a little case for it, so that I can take it outside and see exactly how mobile the two of us are.

You must be tired of this fabric by now, this is the same I used for the Bangkok bag and the camera case too. It is a waxed cotton from Nigeria: easy to sew, easy to iron and pretty durable. I have 6 meters of it, so once I run out of gadgets to cover, I might even make a dress for myself. 🙂 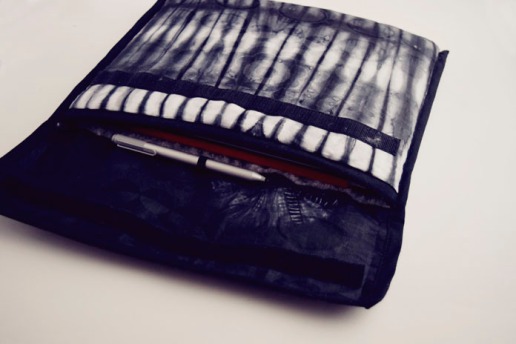 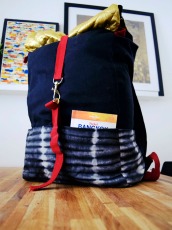 I have used up pretty much all the remnants of the military jacket’s lining to line the case, with some batting sandwiched between the layers for extra padding. The edges are bias bound, and some elastic is sewn at the back to hold some magazines, or paper…although given the fact that there is a pen that works wonderfully with the laptop/tablet (no notepad necessary), and having Pinterest and the whole of the internet with all the information and photos available I could possibly need, I don’t see why I would be carrying a 200 page magazine with 150 pages of adverts with me. Oh the design-fails we make… 🙂 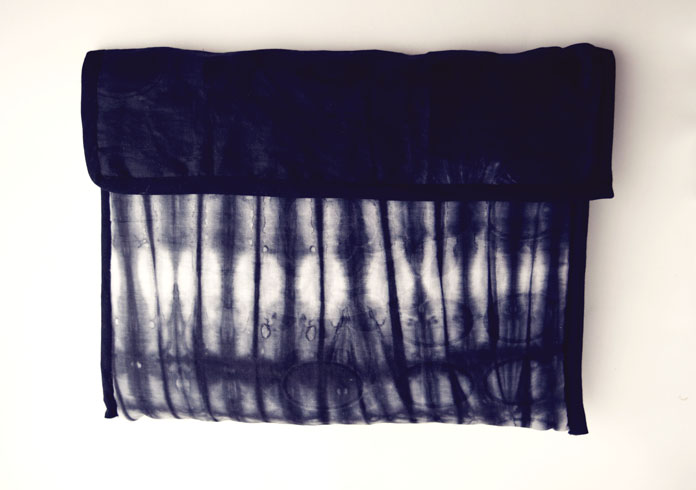 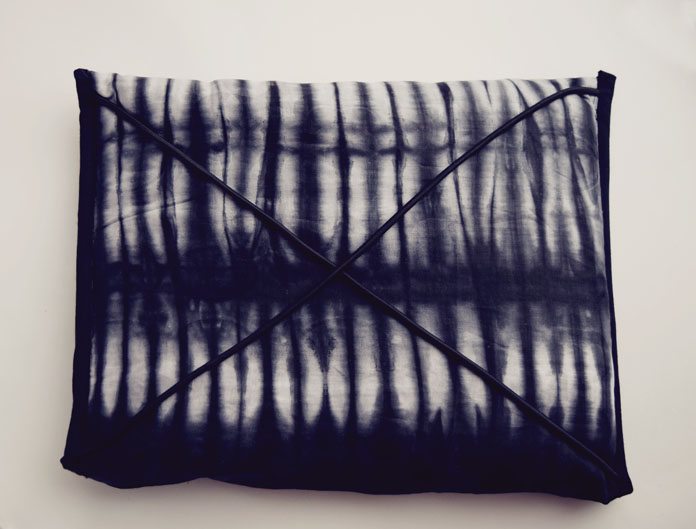 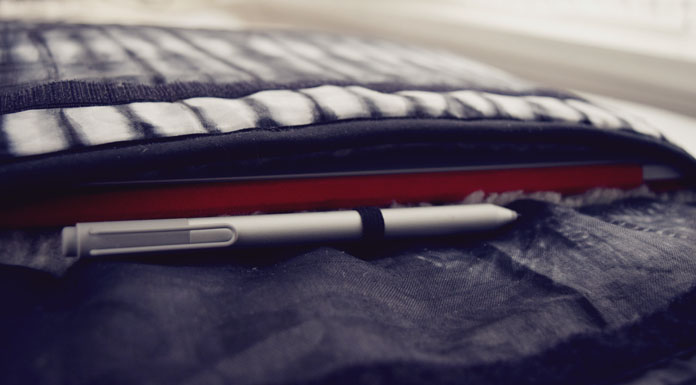 Please welcome the Barcelona Bag. This is the last in my unintentional travel (and other) bag series. 🙂 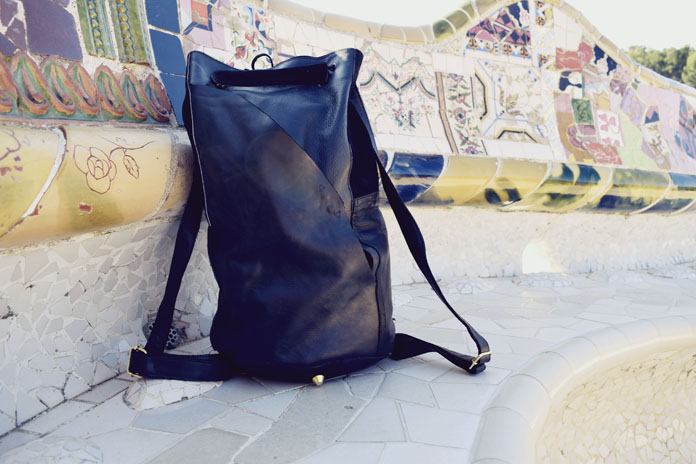 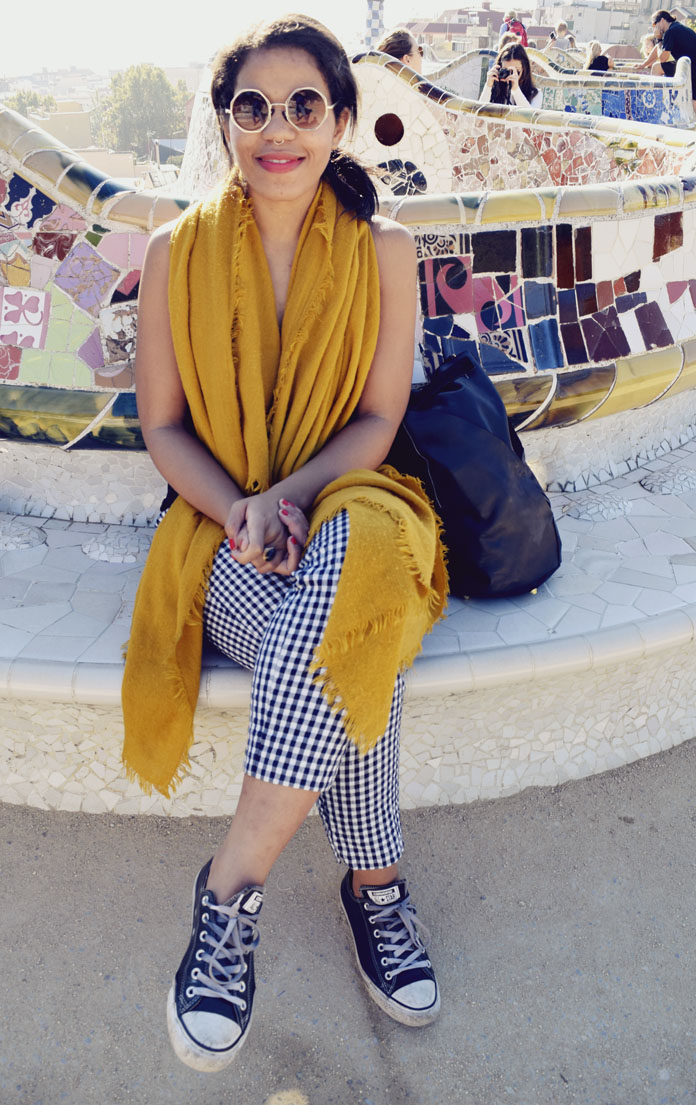 As you know already, I’ve spent a few days in the Spanish capital recently. I knew I would be taking one of my other backpacks as my carry on luggage, but last time I was sight-seeing in Marseille, I realized that carrying a shoulder bag is just a pain in the (quite literally) back. So I came up with the idea of using up the leftover leather from Morocco that I used for that Berlin Bag, and making a small backpack, that can be turned into a regular bucket bag. 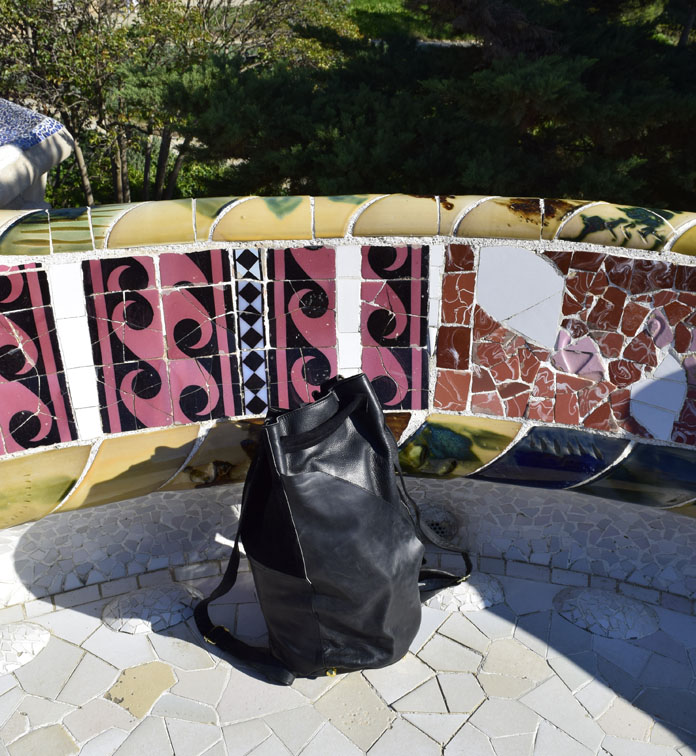 I did not take pictures of it acting like a bucket bag, so you will have to take my word for it, but on the picture below you can kind of see how it works. There are two clamps at the bottom of the bag that click onto the rings on the one long strap to turn it into a backpack. 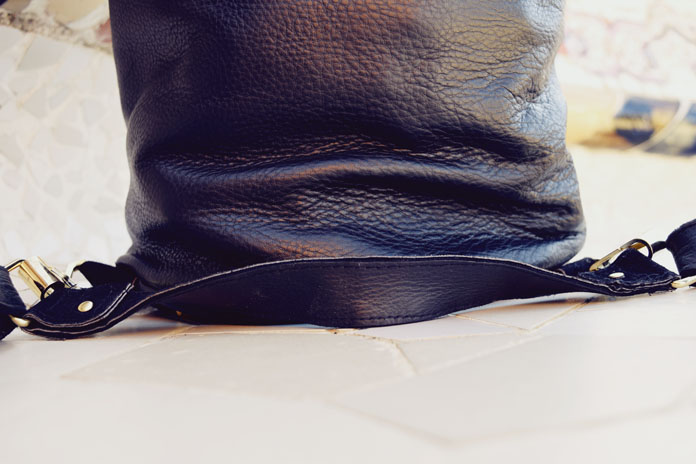 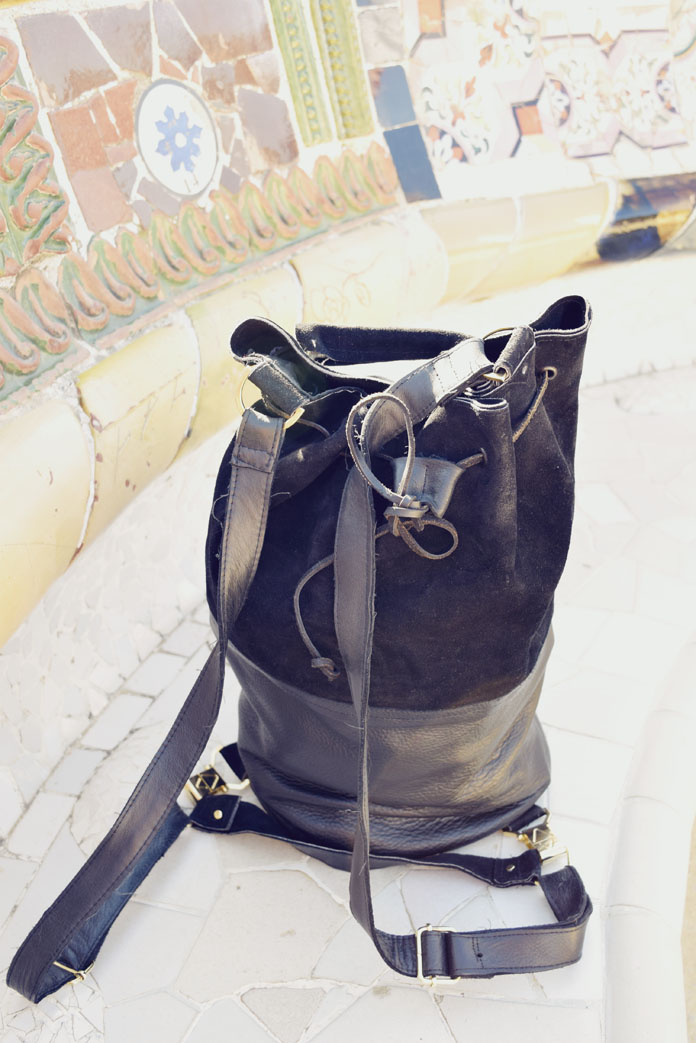 I have lined it with the same material I used for the Bangkok Bag and the camera cover, and put in a zippered pocket which turned out beautifully this time. 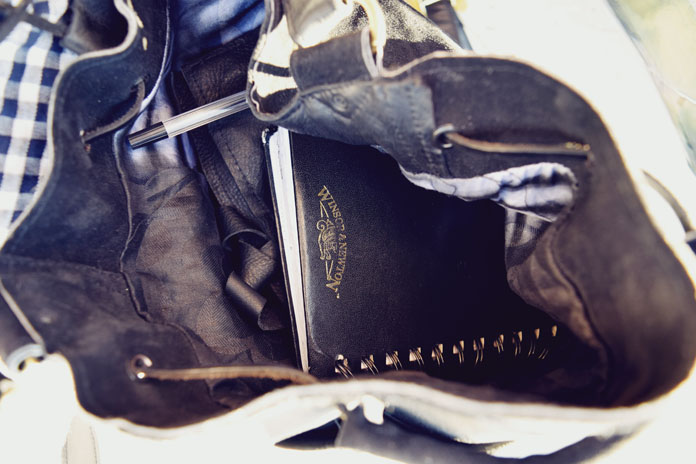 I used double cap rivets for the first time, and while it was pretty easy to insert them, 2 fell out in the middle of the trip. If anyone knows a surefire way of inserting them, please do let me know, as I’m not sure if it was me, or if they were too small to start with, or simply the quality is not what I was after… 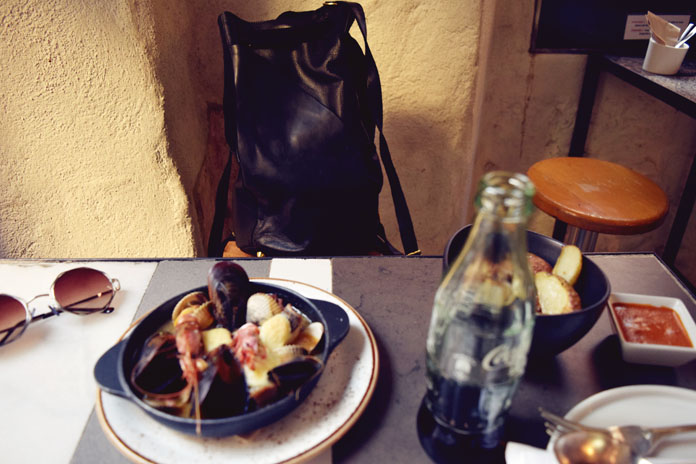 The design of the bag was kind of random, as I just tried to use as much of the leather I had as possible. I had to buy some leather scraps from one of my favorite fabric shops in Brixton for £5/piece. The front pocket is made of one of those pieces and was left raw on the edges. Unfortunately it did not stay closed, so I had to superglue a magnetic closure thing on it. It’s not exactly how I imagined, but it works. All in all, I’m in looove with the bag! 🙂 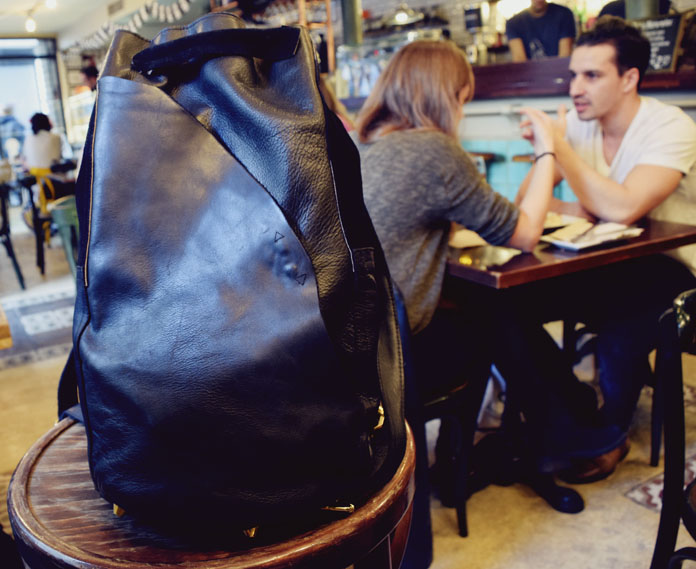 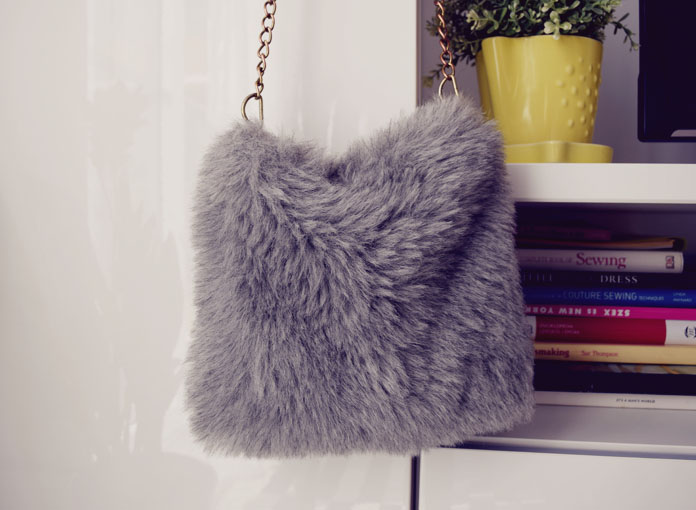 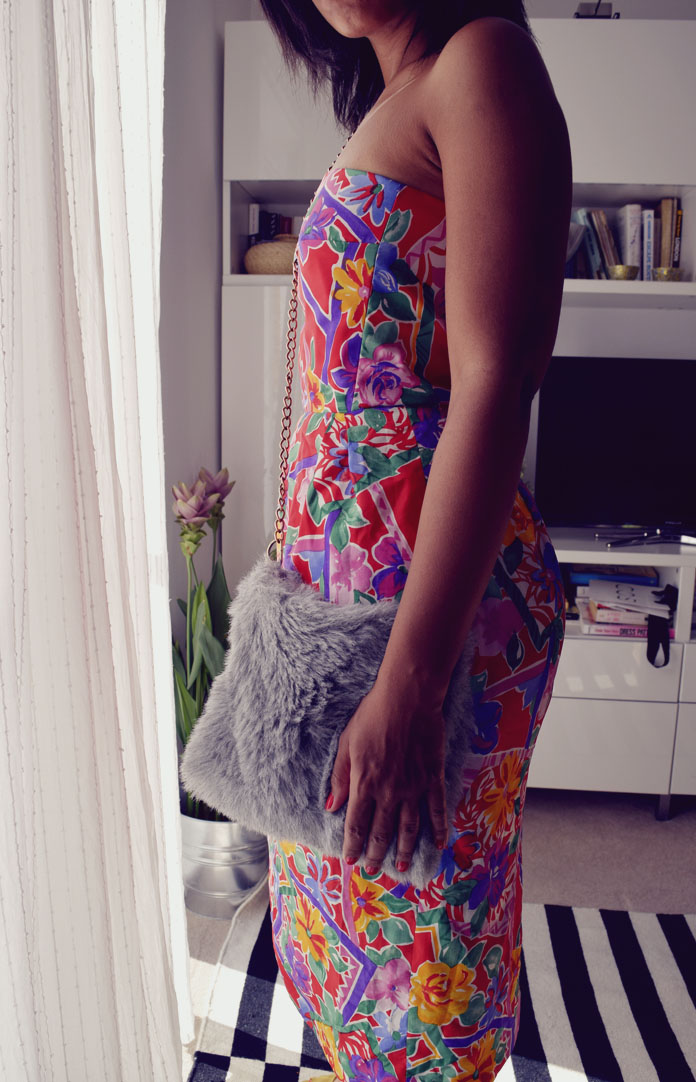 For a person who gets by with a single bag for everyday occasions, I have been extremely busy sewing all kinds of bags lately (the ones for Berlin & Bangkok). And it’s not over yet, but not to worry, there are only two more left to show you…

So, what we have here is my party bag. If you know me in person you are now thinking: what party do you go to exactly? Well, I guess I would call a wild Saturday night a success, if I managed to stay up until 3AM  in the morning and finished something I have started sewing at the time. But jokes aside (I’m not even kidding, though 🙂 ), I may not go out all dressed up that much, but this furry little thing works well when I intend to dress something up too. 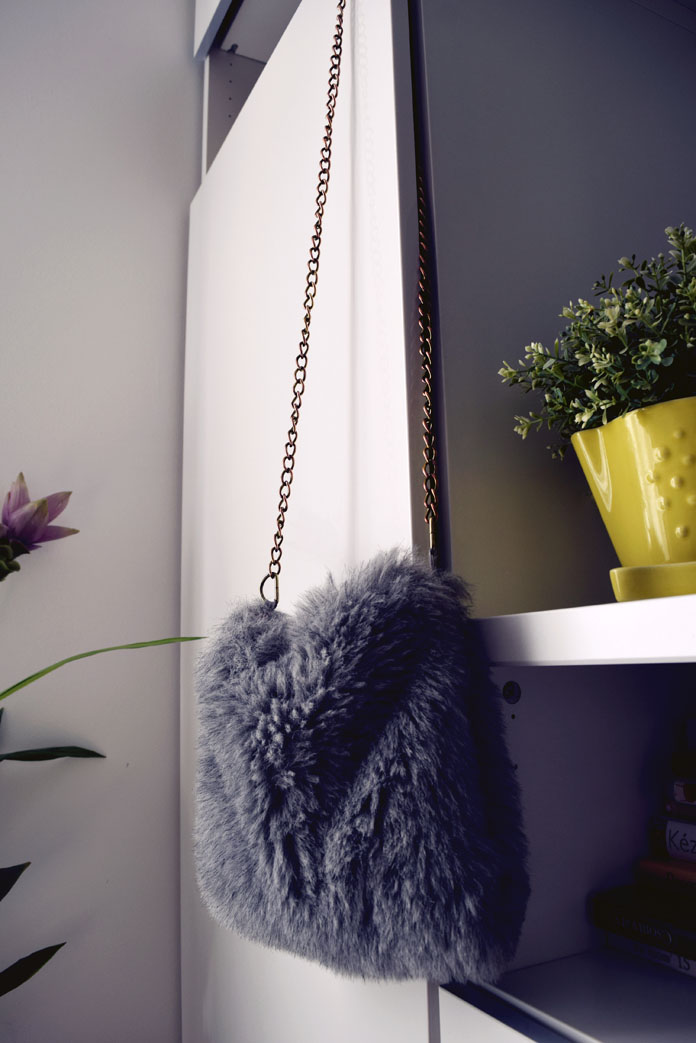 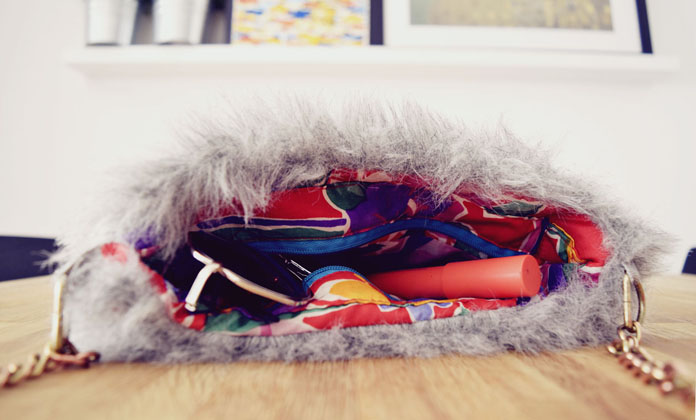 You may recognize the faux fur from my military jacket, as it is made from the leftover fabric that I used for the collar. One day when I accidentally purchased some more fabric that I already did not need (obvs.), I decided to make space for them by doing some scrap busting.

I took the chain from an old bag, and used the remaining fabric from my birthday dress as a lining. The bag is really tiny, but it can hold my “party essentials”, so I am really quite happy for it’s existence! 😉